Sometimes you stumble upon new information. Just as I did some weeks ago when I visited Rob Klootwijk who used to be in charge of the Ducati Club Nederland archive. We found our selves talking about Parallel Twins and Rob told me he should have something nice somewhere. Of course I was interested right away and just some days later he came up with the following copy of a brochure. According to his story this was a pre-production 500 Parallel Twin for the French market. As Gerald from paralleltwins.com told us this folder is of the 1965 prototype which unfortunately never got in to production. The 500 engine even used push-rods to operate the valves. Originally Ducati designed it for the French market but it never got there so they tried to sell the idea to the Italian police-army administration allso without succes 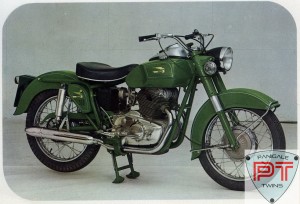