This is the last project I came upon in the spring of 2011. I stranded with my 500 SD  with again sparkplugs failing. A guy pulled over to talk to me and looked at my stranded Ducati and he told me he had exactly the same bike at home. The 500 SD stood in his shed for over 10 years without being touched so I took up the challenge to make something out of this bike and keep the spares that came with it. The bike was a no-runner and I was really lucky the brakes didn’t block the wheels so getting up on the trailer was easy.

The previous owner told me that the bike had recently been running nicely but after a short investigation I found out that  that was impossible.  There where no fuel-lines and the rubber insulators between carbs and manifolds where full of cracks. Carbs where cleaned intensively and after getting the ignition right it was time to see what would happen. As the tank was pretty clean inside I filled it up with fresh petrol, hooked up a battery and gave it a go. Surprisingly all the electrics worked like a charme but she wouldn’t start. After a couple of attempts I decided to use some brake cleaner and after some loud bangs, black smoke and a battery charge the engine was running. The large issue was out of the way with the engine running so now it was time to start on the rest of the bike.

We all know that the Parallel Twin sufferd from the cost cutting down regime in the mid seventies. Some might even sugest that parts of the engine where designed by aprentecis but I wouldn’t go that far. In the design of the engine you can find some elements that sufferd from that regime. As we are planning to race a pair of Paralleltwins at the DCR in may we thought of some improvements  like streight cut primairy gears, a dry clutch to keep as mutch heat out of the oil as possible, fitting an oilcooler and better lubication to the camshafts. Unfortunately we can’t do everything at once so we started with the clutch.

My favorite Ducati sounds is the clutch rattle, especially when you use cineterd plates it sounds like music to me. I know that most people of modern machines hate these dry clutches who sound terrible to them. My guess that Ducati in the last years is equipping there bikes again with wet clutches, just like my 1100 Multistrada it’s as silent as it gets. Dry clutches have been around for ages and might have been the first type of clutches ever used. These dry clutches have a specific reason of being there and there certainly not there to piss off people.

A wet clutch has some disadvantages, due to it’s fairly large size the oil in your engine get swirled around and there will be a lot of turbulence and oil splashing around which will cost you some power and heat exchange. Oil the debris coming from your clutch plates is distributed in your engine and can clog your oil journals at anytime and any place, something that can cause sever problems in later engine life. Maybe one of the large issues of the wet clutch is the heat it generates when clutch plates are closing, the oil gets pressed away and the oil not only heats up but it is “cracked” a little bit and everytime that happens your oil quality is running back. 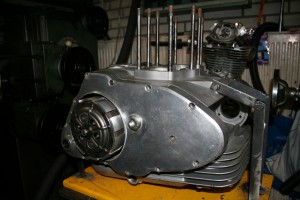 The life span of your oil is shortened.

So what better way is to manufacture a dry clutch for our Parallel Twin project. That is a lot easier said than done, believe me . . . I know! As the Parallel Twins design started as a complete new design It hasn’t been developed from a already existing engine type.

Taglioni always believed in gradual developing into a new type or kind of engine so all good engineering could be “up-loaded” to the new engine. With the 350 and 500 Parallel engines that didn’t fly, Taglioni had to start from scratch. This meant that most of the parts had to be engineered especially for this engine and came from other types. 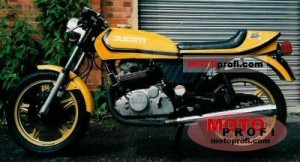 Projects start in all shapes and sizes. Useuall it starts with a search on sites where you can buy all kinds of bikes and parts. So for this bike the trip went south to Italy. In the add it all was promising but getting there prooved to be even more promissing 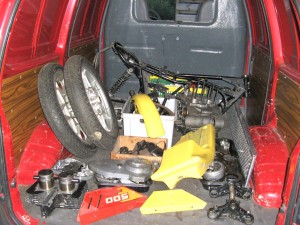 Another Project Arthur has acquired is a 500 SD head with enlarged cooling fins: 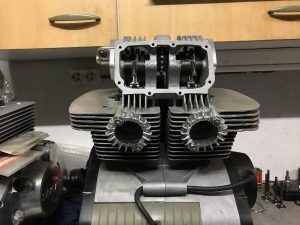 Project #3: 500SD race engine no2
Arthur has acquired some more engines, of which one was started to become a racing engine. It got a new main bearing on the drive side (old one was almost gone through the bearing material!), the crank and conrods were grinded and polished and fitted with new (modern) 600/750 bigend bearing shells.
new piston rings ready for modifying to the cylinders, and the cylinders are awaiting a hone job to get rid of the ridge at the bottom of the cylinder sleeves.
3 new 500 GTV cylinderbanks and 2 pair of cylinder sleeves were obtianed so if the honing job becomes too large for the pistons, a backup was available (either new sleeves or new cylinderblok). 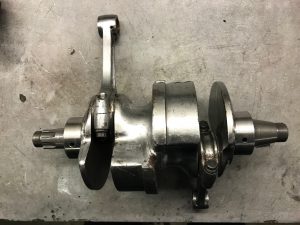