We all know that the Parallel Twin suffered from the cost cutting down regime in the mid seventies. Some might even suggest that parts of the engine where designed by apprentices but I wouldn’t go that far. In the design of the engine you can find some elements that suffered from that regime. As we are planning to race a pair of Parallel-twins at the DCR in may we thought of some improvements  like straight cut primary gears, a dry clutch to keep as much heat out of the oil as possible, fitting an oil cooler and better lubrication to the camshafts. Unfortunately we can’t do everything at once so we started with the clutch. 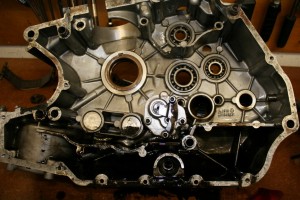 What Mototrans developed from the original Ducati engine was a smart move. They new that the oil level and temperature was a problem with the Parallel twins. The roof of the oil sump in these engine cases is quite low as you can see.

So with little oil you will bound to have trouble especially if the level drops due to leakage or usage. So in my opinion it’s always best to get your level as high as possible and even “overfill” your engine to get as much oil as possible  in there. Mototrans recognized the problem and started in the early 80-ies with fitting an oil cooler to the engine. There are some small modifications needed for fitting the cooler so the plugged the oil feed to the head and used the oil supply from the main channel running through the cases. The hole where the pressure switch sits was used as the feed to the cylinder head via an oil cooler. In a way it is a very simple modification and the Mototrans engines lasted a lot longer and suffer

Les beating than the Ducati engines. Come to think why Ducati never did this . . . . ?

With nearly all “modern” motorcycle engines the oil feed to the head, or heads, is through the cylinders upwards in a separate channel or alongside the studs that fix the head to the casings. With the Ducati Parallel-twin the oil finds it’s way to the head travelling upwards along the studs. In these cases the oil heats up significant and could lose some of it’s lubrication and with a tuned engine or extreme temperature surroundings, the oil gets so hot it nearly burns and loses all of it’s lubrication when it reaches the cam’s and rockers.

On the Parallel-twin there is also a possability  that the main- and conrod bearings are starting to get bad and you will lose oil pressure. You can lose so mutch oilpressure that the oil doesn’t reach your cilinderhead and your cam’s and rockers will seize !

So the best way is to get the oil to travel outside of your engine. Heat pickup will be minimal and you are sure that the oil will get where it is needed. This is not a plug-and-play setup and you will need to do significant work on your engine. We started with drilling holes in the cylinder head and try to fit an oil connection to the oil journals situated in the head. Unfortunately there was not very much aluminium to get a nice fit in there so we just welding some plugs in place to fix an oil connection. 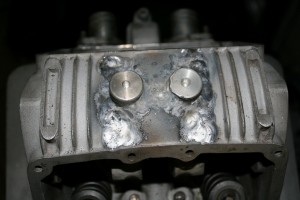 As you can seen in the picture we did some mayor welding to get the plugs fixed. The space to weld is minimal so it’s hard to get your nozzle from your welding machine in there but when you do it nicely it will look something like this. Don’t over do it otherwise your camshaft bearings will not be circular anymore and you can’t fit the cams either and the heads needs a re-work !  Drill holes in the plugs according to connectors you will use, you can use banjo’s or angular fitments as we did.

When you are finished with the head it might look something like in the next picture. Take any kind of fitments you can find. We took air pressure equipment because we could get a hold of it and as you can see they are nicely situated in a way that your oil lines are as straight as possible. What ever you do, avoid narrow angles so your lines will break, damage or fold together with no oil flow as a result. Make sure that the lines you use can take the heat of the oil. 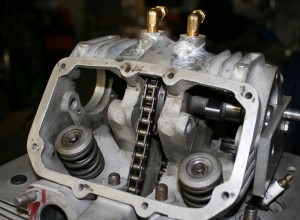 Don’t forget to seal off the original oilfeed at the bottem of the head. It meight safe you some leakage.

When this is finished there is still another part that need to be taken cared off, you will have to seal off the original oil feed in the bottom end of the engine so all oil flow will go through the outside lines. You can do this in many ways I guess but I just made some thread in the crankcases and closed the holes with a plug. You just have enough space to do the job, I used a sealant to be sure it is tight and the plug won’t come out by vibrations. 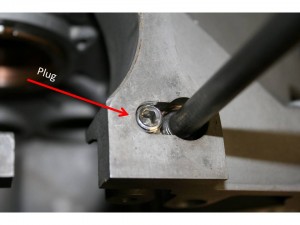 If you think you are done …… think again !

By now your engine is build together with the necessary precautions to allow external oil feed but you will need to connect the oil coming from the pump to the cylinder head. You can do it directly from the oil feed where the oil pressure switch is situated or you can fit an oil cooler between the feed and the cylinder head. The oil get’s hot as hell anyway so it might be a wise discussion to find a small oil cooler you can place in front of the frame above the front wheel. 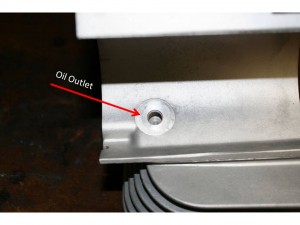 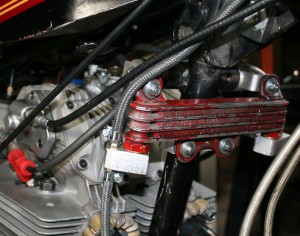 As you can read and see it is not something you can do in half an hour, you will have to take your engine apart and put it back again.  Remember you are modifying the oil feed so if you leave debris in the oil ways you will be in trouble eventually. Killing your engine is the last thing you want to do. Good luck with the modification !!

An other way forward for your oil modification is the way my dear friend Arthur van Til did it. Still the oil feed inside the engine has to be blocked but the welding activities to the head are way less and the chance of the head being deformed are reduced to zero. 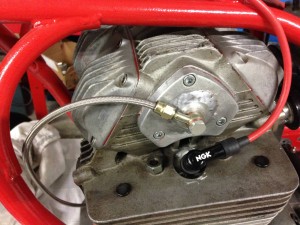 You will have to use the camshaft bearing cover to weld a piece of aluminium to fit a standard banjo and use it as the oil feed to the head. But ……… the paralleltwin has two separate cams which are connected in the middle so you’ll have to make sure that the oil also reaches the other side of the engine. Arthur did it by fabricating a connection piece with O-rings so the oil reaches the other camshaft. For the oil feed he’s using brake lines to keep oil pressure up. 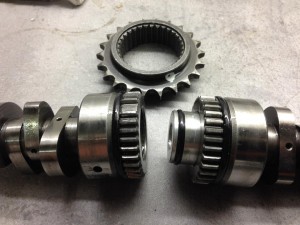 Another mod is weight reduction. The hardest one is yourself!
The others are done by machining, like the oil pump shaft and sprocket.